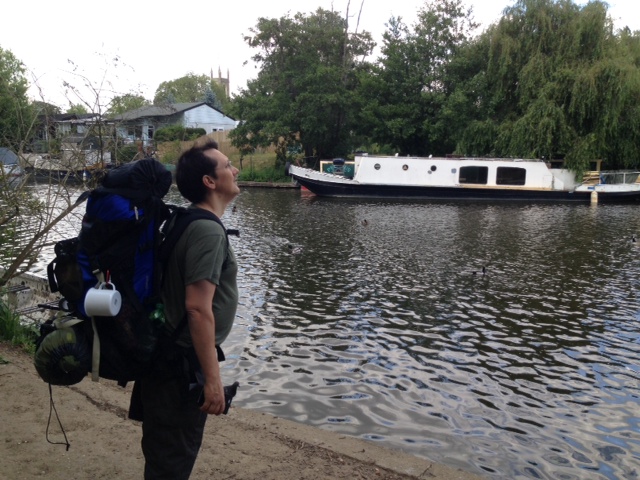 Peace Pilgrimage Update – Carried by the Kindness of Strangers

Will Gethin writes in from the road…Day 2

Following an exhilarating, long first day and night’s wild camping between the river and the main road just up from Hampton Court, day two (Monday) took a dip in mood. Bethan had endured a terrible night’s sleep and finding it claustrophic in the shared tent had ended up trying to sleep outside in the open, Leon was physically sore from the walking, while I was fretting about the technical issues I was having with my digital communications having abandoned my laptop on departure from Bristol for a lighter borrowed tablet device. 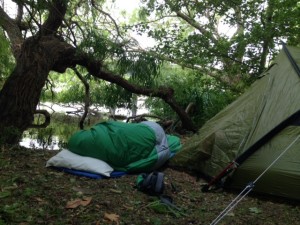 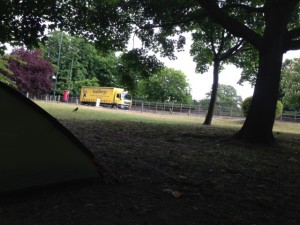 Temporary solace arrived in the form of a heartening cup of tea delivered by a friendly local, Nigel, a rugby correspondent from the Sunday Times who stumbled upon us walking his dog, Rollo.

“I’m very impressed!” Nigel declared as we explained our madcap 200-mile moneyless quest, yet our capacity to pull off this arduous adventure for Peace was yet to be revealed…

I knocked up some porridge for breakfast while Leon worked out how to use our new water filter and set about collecting some river water to put it to the test before producing a delicious pot of coffee to kick start the day. 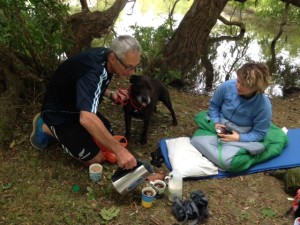 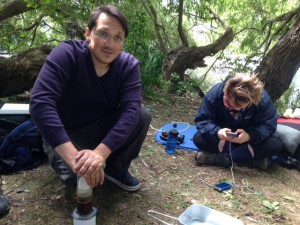 Exhausted from the first day’s walking, we spent some time repacking kit, map reading and route planning and doing admin for the days ahead before setting off around midday along the Thames Path, passing ducks and canal boats under a cloudy blue sky, the air breezily cool and perfect for walking. Way behind schedule for our interfaith meeting at SGI Buddhist Centre in Reading, after a couple of hours walking, we started to try and hitch boat rides along the canal…. 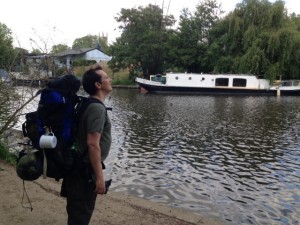 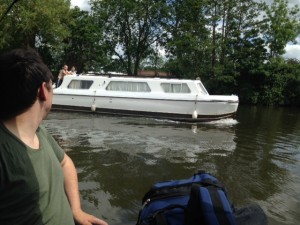 We caught a ride along the canal for a mile with an elderly man called Lane who’d lost his memory. “I won’t ask your names,” he said, “I won’t remember them.” It transpired that Lane had been hit twice by drunk drivers while cycling, breaking his back twice, having his throat cut and suffering terminal brain injuries. And yet, amazingly Lane had gracefully accepted his lot and was supremely happy having taken to enjoying the simple pleasures of calm water bound travel. “Ah you can’t let it get you down,” he grinned when we expressed our sympathy.

Lane also volunteered a donation in support of our peace spreading cause dropping a few pound coins into Leon’s hand as he waved goodbye, which were stashed away for the future Road to Peace film projects kitty. 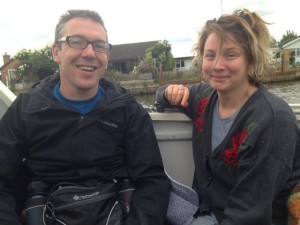 Concerned about getting to our appointment at SGI Buddhist Centre in Maidenhead on time, we hitched a second ride with a couple both proudly brandishing “Always and Forever” tattoos who’d just bought a motor boat and were relishing the newfound sense of freedom and joie de vivre provided by cruising the waterways. Dropped in the middle of nowhere, we walked for a while and then our third boat was a ferry across the canal; summoning the boatman by ringing a bell was reminiscent of Herman Hesse’s mythical Buddha legend, Siddhartha. Explaining our mission and asking the boatman for a free ride, he looked bemused and hesitant at first. “Go on then, I’ll pretend I haven’t seen you,” he grinned. “Keep quiet and don’t tell anyone!”

Walking along the bank the other side, we started to panic about the time. We were due at SGI at 5.30pm, some 30 plus miles away, and it was already 4pm and so, a miracle outstanding, there was no foreseeable way of making it on time, if at all, and we were fretting about letting our hosts down. However, a chance encounter with a well to do car salesman, Bob, and his wife Anita, was to provide the needed miracle.

“We need to help these people,” said Anita, pleading to Bob, who appeared resistant, yet surprised us.

“We need to help these people.”

“Come on,’ said Bob, “I’ll give you a lift up the road,” beckoning us follow. And as we climbed into his beaming clean flash car, he added, “I’ll take you to the monastery, it will be our good deed for the day!”

And the good deed involved a 45-minute drive completely out of their way, delivering us to SGI early. We counted our lucky stars and felt verily blessed!

SGI is housed in a magnificent red brick house, like a stately home, and there are various organic wooden outbuildings within a beautiful nature garden. On arrival, our friendly and charming host, Lisa, who edits SGI’s magazine, made us tea and plied us with fresh fruit.

“These are the best bananas I have ever tasted,” grinned Leon, hungry from the journey an enjoying his first fruit for a couple of days, a welcome change from the endless biscuit snacking we had been fallen into having been donated some at the previous morning’s launch! 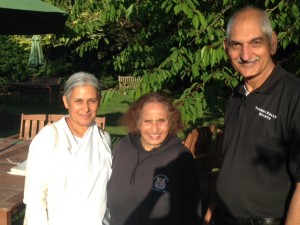 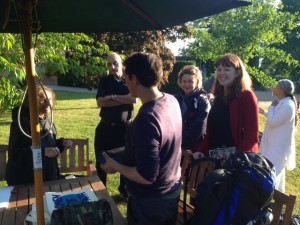 A delicious dinner followed (roast vegetables, couscous, salads) eating outside, joined by leaders of different faith groups, including Sikh, Hindu, Buddhist and Brahmakumaris, as we shared and reflected about peace and interfaith harmony. A bright eyed lady called Meera from the Brahmakumaris, explained how their path was about going beyond religion so people could find a way to feel united. All faiths present were clearly passionate in learning about each other’s faiths and keen to foster collaboration, and to be inspired by their different reflections and insights on “the whole.”

“Until people learn about other faiths they will not really know and understand their own, ” Illa, a Hindu woman, assured me after the meeting: wise words indeed – for most faiths have the same message at their heart, the message of love and kindness. “And treat others as you would be treated, it doesn’t matter what religion you are, just treat each other well,” Illa added. Simple yet vital wisdom for creating peace and happiness, both for ourselves, and others.

“And treat others as you would be treated, it doesn’t matter what religion you are, just treat each other well.”

Finishing up at SGI, Lisa drove us on to a Buddhist discussion meet up group she was due at, which was held in a private home with a dozen people, all from the SGI tradition, present. The theme for the night was the transformation of suffering, a transformation these women felt they were well equipped for, as the basis of their practice was the chanting of the mantra, “Nam Myoho Renge Kyo,” which they believed helped them to grow their peaceful, compassionate “Buddha” within as a way to find inner contentment and joy. “There’s nothing that takes you to inner peace more directly,” one of the group members assured us. And while none of us, three visiting pilgrims, had tried this specific path, and not doubting their sincerity or its power, we did reflect that with so many paths to the divine enjoyed multifariously according to personal sensitivities, it was perhaps a case of “horses for courses.”

Lisa introduced us to an interesting concept she called, the “Two Wheels of Happiness,” a powerful symbol for how our own peace and happiness is dependent on us loving and honouring our own needs as much as we do the needs of others. “You have the wheel of self and the wheel of happiness,” she elucidated, and you have to keep them both in balance. If one is too small you go round in circles, and if the other is, you go in circles the other way.”

“I was impressed by the strong community and support the group gave each other,” Leon said after, “they were wonderfully honest an open about their own journeys and personal issues and they really gave each other the space to be heard and listened to without interruption which I found really inspiring. A powerful lesson in listening.”

…the “Two Wheels of Happiness,” a powerful symbol for how our own peace and happiness is dependent on us loving and honouring our own needs as much as we do the needs of others.

One of the SGI group, Anita, kindly then gave us a lift on to our next encounter with the divine feminine that seemed to characterize the day – to the house of the beautiful yogini, Davinda Ojalla, who put us up in her home yoga studio overnight. The warm and friendly Davinda generously fed us her own scrumptious raw food treats and smoothies while holding a very nourishing and calm space for us to relax and revive in – needed respite before the 16 mile walk to Reading the following day, and the many interfaith meetings arranged by Bethan, as well as the evening screening of Road to Peace with a climate action group. 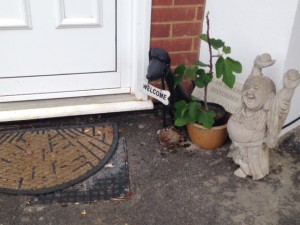 Reflecting on the day, Leon was amazed by the magic of its unfolding:

“Getting to SGI on time seemed like a total impossibility at one level yet I never lost faith we’d get there. It suggests it’s all about having the vision that you’re going to be on time and holding fast to it. And it can happen in the most unexpected of ways, just trusting it’s going to happen without being dogged about it. I had been wanting to hold the moral ground and walk rather than be driven there and yet when we were so kindly offered a lift the whole way it felt the most natural thing in the world to just accept this gift – not just to get us into SGI, but to get us back on track for the whole pilgrimage.

I’ve still yet to update you on the heinous dramas that were to follow the next day in Reading resulting in us three pilgrims having to split for a while and go our separate ways….more coming very soon!

Join us for screenings of our Dalai Lama film Road to Peace on Sunday 21st June at the Barge Inn in Honey Street / Pewsey and on Wednesday 24th June at the Westway Cinema in Frome.

Watch Road to Peace online or on DVD!