Road to Peace Pilgrimage – how the journey began!

Will Gethin writes in from the road…

Sitting here at the Global Cafe in Reading, now on day four of this perilous and exciting “moneyless” quest, I can report that its been an exhilarating ride so far, full of highs and lows, magic and fun, trials and tribulations and yet always an adventure. Plus with the cause of spreading Peace and Happiness at its heart, and celebrating the Dalai Lama’s 80th birthday, the pilgrimage feels profoundly compelling, which keeps us going when times get tough, and we’ve been mightily tested these last 24 hours!

Today, myself and fellow pilgrims on the road – Leon Stuparich (director-producer of an award winning film Road to Peace sharing the Dalai Lama’s message of Peace), and Bethan Lloyd (singer-performer and filmmaker) – have had to disband, all going our separate ways. Bethan, currently living in Berlin, has headed home to her folks in Wales for some TLC after a few hours spent in A&E last night with acute gastroenteritis and dehydration, myself resting my weary, blistered feet here in Reading, and Leon ploughing on solo along the Ridgeway…so what the hell happened? You may well ask!

Supported by friends, interfaithers and members of the Tibetan community, we launched the Road to Peace Pilgrimage at London’s beautiful Tibetan Peace Garden in Lambeth Road on Sunday and were blessed with a heart-warming send off. Here in the garden’s central mandala, an interfaith ceremony for world peace featured the incredible Tibetan monks of Tashi Lhunpo Monastery in India, who swathed in flowing orange and ochre chanted stirring prayers and performed colourful blessings and rituals waving peacock feathers, ringing bells, burning incense, and scattering rice and water. 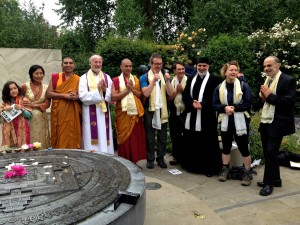 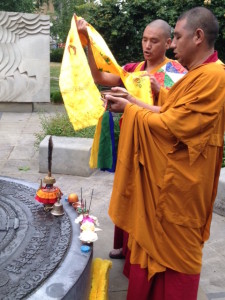 Interfaith minister and intrepid pilgrimage walker and author Reverend John Merrill orchestrated the ceremony which featured leaders from Muslim, Jewish and Buddhist faiths, and gave a fascinating address sharing his experience of walking all the world’s major pilgrimage routes, mostly undertaken without spending money – as we too were now about to do – trusting and relying on the kindness of strangers for food, water and support, and yet without ever coming to any harm… well if John could pull off the moneyless pilgrimage quest for 43 years covering over 200,000 miles, surely we could for two weeks and 200 miles, I wondered? It felt exciting to take up the challenge and find out for ourselves if this ancient pilgrimage tradition was still possible in modern Britain.

Other launch highlights included Leon’s address sharing his vision for the pilgrimage and some wise reflections on peace from Rabbi Jonathan Wittenberg of the North London Synagogue, and Dr Sheikh Ramzay, a Muslim imam and Peace Ambassador for the Universal Peace Federation, both avid campaigners for interfaith harmony. Katie Rose also united all present for enchanting communal chants of Om Mani Padme Hum, which Tibetans believe invokes the compassion of the benevolent Buddhist deity, Chenrezig. And one of our own pilgrims, Bethan, sang a beautifully expressive “farewell” song in Welsh. 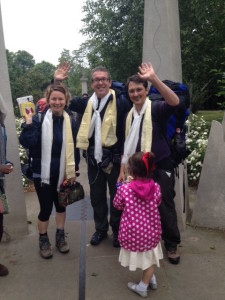 Waved off feeling very blessed and uplifted, we headed for the Thames Path through London’s urban metropolis, accompanied by our first supporting walker, the amazing Sophia Neville, a psychotherapist from Wimbledon. Stopping for a picnic lunch by Battersea Park’s Peace Pagoda (which celebrated its 30th anniversary only the day before!), we were already feeling the weight of our bags and Sophia, “angel of the day,” wisely encouraged us to offload superfluous kit (which we have been doing little by little ever since), generously carrying our extraneous possessions to store safely till the pilgrimage’s end. 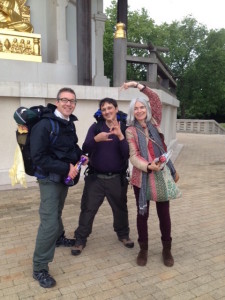 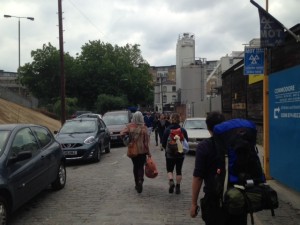 Parting with Sophia at Wandsworth, we continued out of London along the Thames Path, where I randomly encountered an old school friend, Rupert Douglas, running along the Thames, a curious encounter! At Kingston we took a footpath into nature wilds, hugged some trees, and emerged feeling refreshed and buoyant, and feeling happy, excited, united and alive, we continued on through verdant Richmond Park and back onto the roadside, singing and rapping and making up harmonies as we went, about all the things we were encountering along the way:

“Roaring cars on the road to peace,

Kestrels circling on the road to peace…”

And on we merrily rambled, throwing in Oms and chants and impish rhymes like playful troubadours. 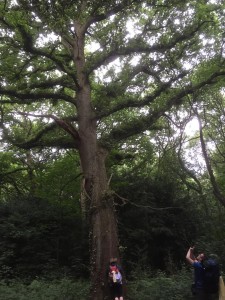 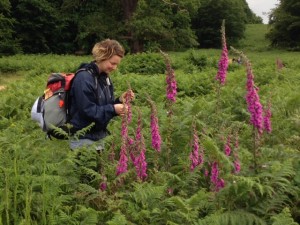 Our first day’s walking came to a head at Hampton Court when Leon’s legs and feet were giving way (he was stoically carrying more than his fair share!), six miles short from where we had been offered a place to spend the first night. We took up our first “moneyless” experiments with asking for support, approaching people on the way out from a concert at the Hampton Court palace gates and asking for a ride up the road. No joy! 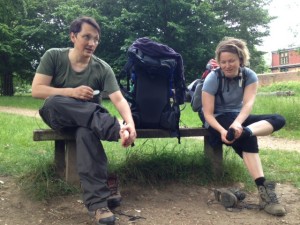 …And so tired and hungry, we headed across to the local pub and then a hotel, asking for a room or a garden to camp in. The hotel’s young deputy manager – a budding filmmaker – apologised that he couldn’t help with a room, producing biscuits and the offer to sit and relax awhile instead while we bemoaned our fate, wondering where on earth we were going wind up for the night… 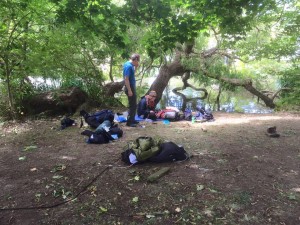 And then finally, following a tip off from the helpful Hampton Court’s park ranger (who would have let us stay in the grounds but for a pest control shoot due that night), we headed to a relatively secluded spot up the road to camp, between the river and the main road, known, curiously, as “The Riviera.” Here we pitched camp, Leon and Bethan sharing a very cosy two-man tent, and myself a tiny one man.

I loved that first night, all cuddled up in my sleeping bag, just a thin canopy veiling me from the elements, somewhere on the edge of London, and with all the adventure of our pilgrimage and the unknown lying ahead. Awaking at about 4am, I relished the bitter sweet fusion of traffic hum and birdsong and the sheer randomness of the whole scenario, here at the edge of the city, as we prepared to embark on a second day’s walking along the road to peace – from the Thames Path to Maidenhead, where we would be attending an interfaith discussion about peace Bethan had set up in partnership with SGI Buddhist Centre, to include representatives from different faith groups…

I am afraid, this blog will have to stop there for now, the Global Cafe is shutting here in Reading and time to get some sleep. Next installment, including the aforementioned challenges of the last 24 hours coming shortly, watch this space! … 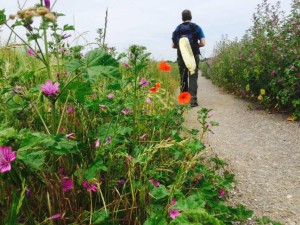 Join us for screenings of our “Dalai Lama” film Road to Peace on Sunday 21st June at the Barge Inn in Honey Street / Pewsey and on Wednesday 24th June at the Westway Cinema in Frome.

Or watch Road to Peace online or on DVD!