The Dalai Lama shares his vision of peace and happiness for the next generation, citing that “inner disarmament would be the most effective means of gun control and would also be the starting point for a denuclearized world. He suggested it would be necessary to educate and train a whole new generation not to resort to violence but always to turn to dialogue to resolve conflicts and disagreements. If that could be done there would be hope of this becoming a century of peace.”

Dehradun, Uttarakhand, India, 6 April 2016 – Tibetans young and old, lay-people as well as monks and nuns lined the road from the Rajpur Helipad to greet His Holiness the Dalai Lama when he landed there this morning. A short drive brought him to his destination, the wellness retreat at the verdant 21 acre Vana Malsi Estate just off the Mussoorie road.

“Brothers and sisters,” His Holiness began, “when Analjit Singh, who has become a close friend, invited me to come, I couldn’t refuse. I really appreciate the work you are doing here and I’m glad to see that people have come from far and wide. One of the things I’m committed to doing is sharing with others my sense that as human beings we are all the same. I am more comfortable thinking of myself as just one of the 7 billion human beings alive today. If I were to think of myself as the Dalai Lama, as somehow different from others, it would leave me lonely and create a barrier between me and others.

“During almost the whole of my life, I’ve been witness to killing and violence. When I was born the Sino-Japanese conflict was about to break out and the conditions that gave rise to the Second World War were stirring in Europe. After that came the Korean War and the Vietnam War. Throughout this period, many people suffered and were killed. Here and now we’re living in peace and comfort, but at the same time in other places many people are dying as a result of anger and other negative emotions. If things continue this way, the 21st century will end up being as violent as the century that went before. Violence always brings suffering and yet no one wants suffering, we all want to live in peace.”

His Holiness mentioned that scientists and medical researchers have found evidence to show that basic human nature is compassionate. He explained that this gave him great hope. But he also observed that we all come from a mother, even terrorists and merciless dictators. This is an experience that we all have in common. Indeed he suggested that without our mother’s love we would not survive.

“The problem is,” His Holiness remarked, “that although our basic nature is to be kind, affectionate and compassionate towards others, and we tend to be like that as children, we seem to lose these qualities as we grow up. We no longer feel the need to care about others, exploiting them, bullying them and lying to them instead. We become inured to others’ suffering so that if a tiger kills someone it’s news, but when there are reports of people killing each other, we are almost indifferent to them”

He described our modern education system, focused as it is on materialistic goals, as inadequate. Inner values are the basis of inner peace and in the past we relied on our religious traditions to learn about them. Today, however, 1 billion human beings declare they have no interest in religion and of the remaining 6 billion there are many who are either insincere or corrupt in their religious observance, putting it mostly to divisive uses. 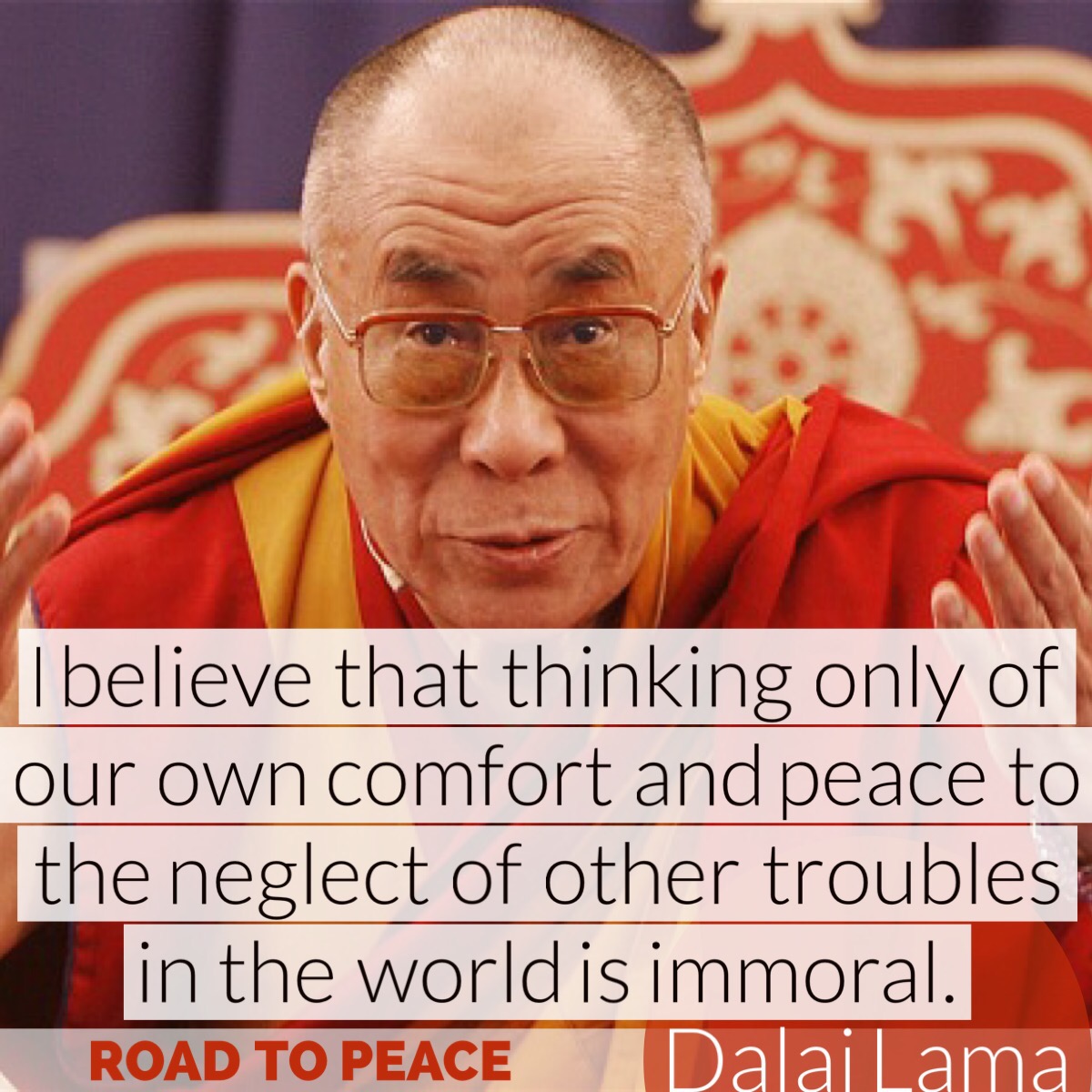 “I believe that thinking only of your own comfort and peace to the neglect of other troubles in the world is immoral. The time has come for us to consider seriously how to change our way of life, not through prayer or religious teaching, but through education. Since moral education can sometimes be merely superficial, we need to devise a systematic approach to exploring inner values and ways to create a more peaceful world. This involves thinking about the future and although I will not live to see the happier world that may come about, if those young people who belong to the 21st century generation make the effort they may create a happier world and ensure that this century is a more peaceful era.

“Many of the problems we face we create ourselves as a result of short-sightedness and narrow-mindedness. This amounts to ignorance and we have to overcome it. Those of us who belong the old generation who created so many of these problems have a responsibility to indicate what’s wrong and how we may achieve a happier humanity. This is my first commitment; the second relates to my being a Buddhist monk and my interest in promoting religious harmony. India, the world’s more populous democracy has shown over hundreds of years that different religious traditions can live in harmony, side by side. One vivid example is the way Guru Nanak, the founder of Sikhism, came from a Hindu background but went on pilgrimage to Mecca to demonstrate his respect for diversity. India’s example is something the world could learn from.”

Acknowledging that various approaches to wellbeing are employed at Vana, His Holiness pointed out that just as we observe physical hygiene to preserve our physical wellbeing, in order to maintain a healthy mind we also need to observe emotional hygiene. He remarked that a sense of inner disarmament would be the most effective means of gun control and would also be the starting point for a denuclearized world. He suggested it would be necessary to educate and train a whole new generation not to resort to violence but always to turn to dialogue to resolve conflicts and disagreements. If that could be done there would be hope of this becoming a century of peace.

During our interview for the film Road to Peace, we asked the Dalai Lama what he would like to say to the next generation, this was his powerful message:

Taking questions from the audience, he was asked how to be more compassionate in day to day life His Holiness suggested becoming more familiar with the working of our emotions as described in ancient Indian psychology. He stressed that developing compassion isn’t something that can be done in a hurry, pointing out that he’s been working on it for 50 years. He said it’s not like something you turn on at the flick of a switch.

Another questioner told him he liked the energy that anger can bring and wanted to know if His Holiness thought anger could ever be acceptable. He replied that anger can sometimes arouse energy, but its basic nature is short-sighted ignorance. Since it is based on an unrealistic view, it tends to provide for unrealistic action.

Asked how to comfort those approaching death, His Holiness said each case is different. However, no matter what beliefs you may hold about the afterlife, the important thing is that death should as far as possible be peaceful. He noted that anger, fear and attachment were to be avoided. He referred to the different levels of subtlety of consciousness that Buddhism speaks about and briefly alluded to the cases of people whose bodies remain fresh for some time after clinical death because they remain focussed on the subtlest consciousness. Noting that death is bound to come sooner or later, he said that if you have lived a meaningful life, when it does there’ll be no cause for fear. He linked the idea of living a meaningful life to cultivating a wise sense of self-interest, which involves taking others’ needs and concerns into account. He stressed that this entails taking a more realistic view of whatever occurs by considering it with intelligence and reason.
He recommended that when they returned to their rooms each person should write down one thing they had learned from His Holiness’s talk and work on putting it into effect.

As thunder began to roll overhead, His Holiness returned to the local helipad from where he flew back to New Delhi.